My research program attempts to understand tobacco carcinogenesis, build cancer risk stratification, and develop preventive interventions with the ultimate research goal of facilitating cancer prevention as a key pillar to support effective cancer management. Lung cancer has been our current disease model, because one of every 16 people in the US will develop lung cancer in their lifetime and over 140,000 US citizens lose their lives annually while tobacco exposure is the major risk factor for lung cancer and smokers are the high-risk populations. To achieve our ultimate research goal, we train, integrate and collaborate with research teams with expertise in organic chemistry, chemical biology, molecular biology, cellular biology, pharmacology, bioanalytical chemistry, and clinical science. There are three major and complementary directions. 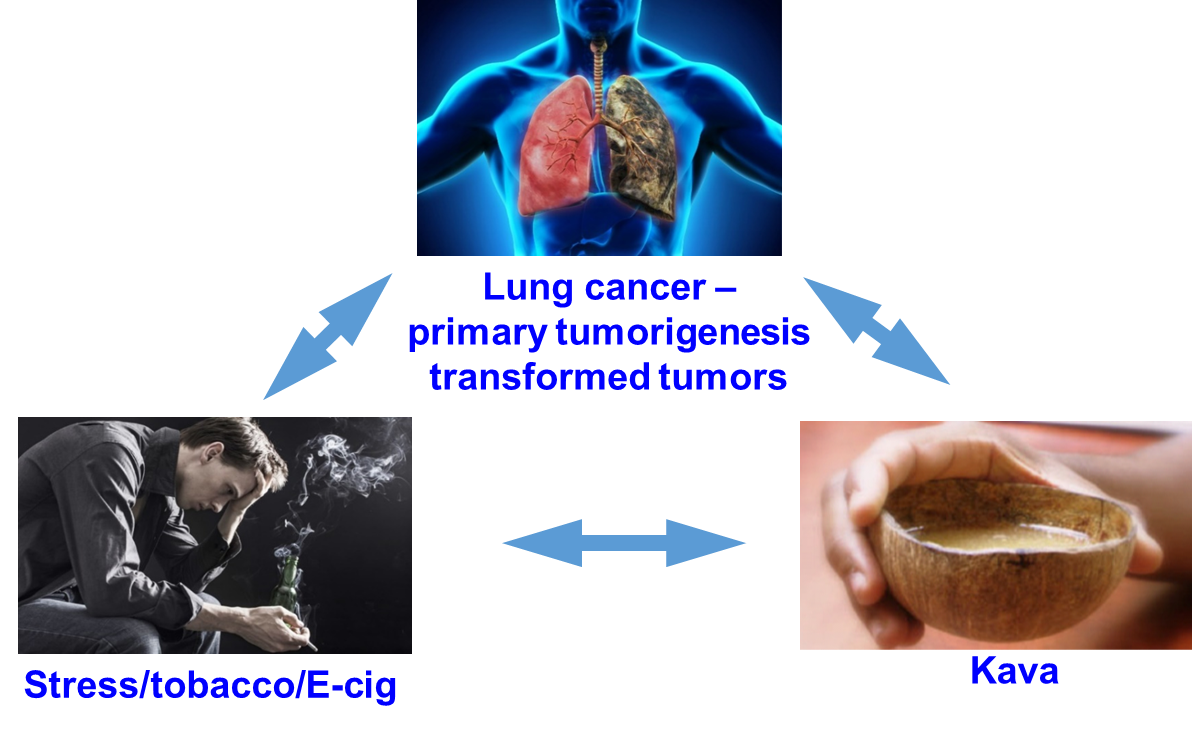 Although tobacco use accounts for 85 – 90% lung cancer incidence, only 10 – 15% smokers will eventually develop lung cancer. One key challenge is whether it is possible to predict which smoker has a higher risk of lung cancer WAY BEFORE current diagnosis, which would significantly improve the feasibility of cancer prevention and transform lung cancer preventive management. Our long-term goal is to develop a non-invasive peripheral risk surrogate matrix to fill in this critical gap. We are currently developing carcinogen-specific urinary DNA adductomics, plasma protein adductomics, and carcinogenesis-selective metabolomics as practical and non-invasive peripheral surrogates in predicting lung cancer risk. With respect to the experimental models, we are integrating the lung tumorigenesis animal models and various human clinical samples to explore the feasibility of this paradigm-shift strategy.

Upon identifying individuals of higher risk of lung cancer, effective and feasible interventions would be needed to prevent lung cancer development. We have been evaluating various natural and unnatural entities to search for effective lung cancer chemopreventive agent. Kava has been rigorously investigated in our group over the past 15 years – we are known more as “The kava group” than our real name. Stimulated by promising epidemiological observations, we hypothesized that kava has the potential to reduce cancer risk via multiple mechanisms. Using several well-characterized lab animal models, we have demonstrated the chemopreventive potential of kava against lung, prostate, and colon tumorigenesis. Particularly for tobacco carcinogen-induced lung tumorigenesis, kava and its active ingredient demonstrate outstanding in vivo efficacy with a solid safety profile. The mechanistic investigation also led to the discovery of several non-invasive biomarkers that greatly improve the feasibility of its clinical evaluation with one pilot trial accomplished. Stimulated by the exciting results from the pilot clinical trials, we are working to implement more rigorous clinical trials.

In summary, our research program aligns at the interface of organic chemistry and biology, focusing on lung cancer early diagnosis and prevention, integrating medicinal chemistry, pharmacognosy, pharmacology, molecular/cellular biology, and clinical science. We have established successful collaborations with researchers from diverse backgrounds. Our research has been highly translational with commercial potentials, demonstrated by two start-up companies based on our research results. One clinical trial completed and two clinical trials are expected to be initiated in 2020. Hopefully more will come in the future with our team effort. Without neglecting other responsibilities, maintaining a strong, vibrant and well-funded research program that provides exceptional training for graduate students and post-docs is our top priority.